Our discussion on John Berger culminated on the topic of the nature of a certain type of convergence – that which sets up the conditions for the experience of what he calls an ‘event’. (See our transcript)

The following is the result of my rumination on this.

Sat in an armchair at my open front door in the sun, early afternoon.

A place usually witness only to passing activity, when lingered on, becomes like a stage set, a segmented sample of street, a cross section of horizontals of tarmac, bricks, sky, the rhythmic distribution of chimneys. Above my head electricity wires slice through blue, divvying it up triangularly like a cake. Things make passing appearances: clouds, birds (the collective whip around ffp ffp ffp of wings: a sound pocketed in the quiet), a popcorn wrapper scratching around on the footpath that my socked feet can feel; they rest on a crack which moves out from them and away to the right.

There is a thick curving corner of red brick to my right (my house, the facade of my house – what is this the threshold of? – the face of something which doesn’t resemble it’s face at all; the face bears more resemblance to what it sees than what it contains). The curving corner of brick was the same temperature as my hand when I first touched it; now it is slightly warmer. It is terra cotta and feels rough and bulbous as if lava cooled to make it.

All of the windows directly opposite me have their blinds shut, but in one of them I see the woman who is going into her house – right beside me to my left – reflected; the woman right beside me is reflected in a window whose blinds are shut across the street.

Birds, collectively, are like clouds in their presence. I want this to be translatable, to describe every moment and movement of their presence in the scene, but can say nothing about it.

Clouds (like birds) create an experience which is very private but also very other: private because they act as if I alone have glimpsed precisely this formation; we are engaged in an intimate relationship of showing and seeing, and because of the distance covered by or contained in this relationship, which acts like a secret. But then there is the dispersal, the moving on, with which the cloud takes itself off and is now showing something different to somebody else.

A gull punctures the world with its sound.

Another bird – I can’t remember what kind of bird, only its movement – launches from the ground – grabbed by a bend and spring, its slow stride is interrupted, and it is flung into a smoother and more rapid ownership of space, a swifter consumption.

A van pulls up; the woman in the house to my left (who I had seen in the window) comes back out and walks in front of me. There is some trouble with her car and a man gets out of the van, leaving it running as he helps her (a lazy sound that dissolves into the sunshine). She walks back into my vision and says ‘hi’, apologizes for the noise. I can just about see to my right the back of her body as she touches her hand to her head, this stance making a base for her intermittent gestures of frustration. Their words drift in the other direction. The sun on the street, or some other quality – a texture detectable only through its objects – blankets the scene with inevitability which makes it a comfort, like a nuisance one is fond of. It has laid itself down with the simplicity of a sheet.

The van’s open window is right in front of me and the pierce of a harmonica melody comes from it, its tune and the music playing in my kitchen drift-reach for each other, and they mingle here above the tarmac. 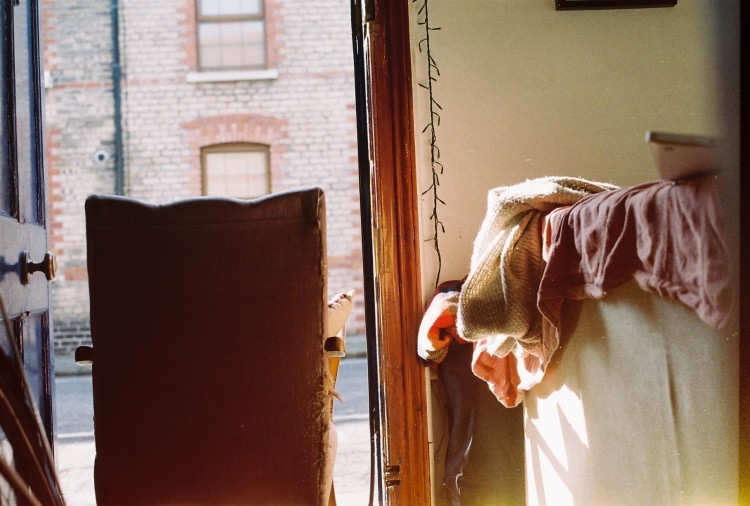 For the rest of our work on John Berger, see here.